Evelyn is married to Lee Abbott, and they have four children, Regan, Marcus, Beau, and an unnamed infant. Evelyn's primary obstacles are the physical challenges of pregnancy and preparing for the harsh reality of raising a child in a world where survival requires silence.

Evelyn has medical knowledge — she knew what prescription medications would help Marcus when he was sick, how to plan for and deliver a baby, and the way to properly bandage a wound. She's incredibly organized and has many practical skills key for survival such as cleaning and maintaining clothes and preparing food safely. Furthermore, she homeschools her children using American Sign Language (ASL), making sure they continue to learn despite the circumstances. She focuses on creating a home where her children can be children living in relative comfort and protection, away from the dangers of the outside world.

Evelyn scavenges for medication for her ill son Marcus. After finding just what they need, the Abbotts head home. While crossing the bridge, they discover that Beau, their youngest son, has taken one of the toys from the store and turned on its siren, alerting the nearby creatures. Lee, who is carrying Marcus, sits him down and rushes to Beau but is too slow and Beau is killed by a creature.

More than a year later, Evelyn is approximately nine months pregnant. After dinner with the family that night, Evelyn joins Lee as he's working on an amplified hearing aid for Regan. She drags him away from his work and the couple proceed to dance while listening to Harvest Moon by Neil Young.

The following day, Evelyn home schools Marcus, and when she finds herself alone, she spends the rest of the day in Beau's old room, crying and reminiscing. Evelyn's water then breaks. She makes her way into the basement, where she steps on an exposed nail and accidentally drops the glass picture frame from Beau's room. It shatters and draws the attention of the nearby creatures. After signaling an emergency by changing the exterior house lights to red as a danger signal, Evelyn notices one of the creatures walking around upstairs.

Evelyn picks up a timer and hides behind the wall as one of the creatures makes its way down into the basement. The timer goes off, and Evelyn rushes upstairs while the creature is distracted, but she is forced to flee upstairs after spotting another creature just outside the house.

Evelyn's contractions are getting stronger by the moment. She is forced to lie back in a bathtub and remain calm and quiet while the creatures move throughout the house. Meanwhile, Marcus runs into the field, where he sets off the firecrackers, the explosions providing a loud enough noise for Evelyn to scream without being heard and gives birth.

Before long, Lee joins her and carries Evelyn and their newborn baby to the barn and takes them underground. Evelyn awakens from a nightmare with Lee standing at her side. He assures Evelyn that she's safe and that the creatures can't hear them underground. Evelyn then asks about Regan and Marcus, who are still outside somewhere. However, Lee intends to find them. Evelyn looks over to their newborn baby and then says that she could've carried Beau, but he was so heavy. She feels that she should've been carrying him instead of him walking on his own. She then makes Lee promise that he'll protect their kids.

Evelyn awakens to find the basement flooded from a busted water pipe. She looks over and sees her baby's crate floating. And just a few feet from him stands one of the creatures that have made their way into the basement. Evelyn creeps over to the crib and retrieves her baby boy while mere inches from the creature. She slowly backs up and hides in a corner.

Evelyn makes her way back to the house with her baby boy and into the basement, where she witnesses as Lee sacrifices himself to save Regan and Marcus. Evelyn leads Regan and Marcus into the basement. She sits Marcus in a corner with the baby as Regan uses the high-pitched frequency from her hearing aid to hurt the creatures. For the creature, the pain is so excruciating after Regan places the boosted implant on a nearby microphone to magnify the feedback that it collapses. Painfully disoriented, the creature exposes the flesh beneath its armored head and renders itself vulnerable to a shotgun blast from Evelyn. And though they've managed to kill one, the sound of the gunfire draws more creatures in their direction.

After retrieving the air tank from the barn, Evelyn and the kids make their way to a rail yard, where they reunite with an old neighbor, Emmett. He tells Evelyn and the kids that they can’t stay, as there aren’t enough supplies. Hoping to appeal to him, she shows him the baby inside the box.

Emmett inquires about the feedback from the microphone and how it seems to irritate the creatures, but Evelyn doesn’t exactly know the science behind it. Evelyn gives her condolences, assuming that Emmett’s family is dead. He reveals his kids died the first day and that his wife, Nora, died just 11 weeks ago from an illness. Evelyn then asks Emmett if he knew it was Lee when he saw the flame night after night. Emmett admits that he knew, but he didn’t consider coming for them because people have changed since it all began.

The following day, Evelyn learns that Regan left and went searching for a community after hearing the radio broadcast of "Beyond the Sea." Evelyn asks Emmett to go after her. She reminds Emmett that they were once friends and pleads with him to go after Regan.

Evelyn places the baby in the box. Unfortunately, the tank is just about out of air. And so, she decides to take a trip to the pharmacy on her own. Evelyn makes her way over the sand path and across the bridge where Beau died. She places her wedding ring on Beau’s headstone and proceeds. Evelyn arrives at the pharmacy without incident. She gathers medication as well as two tanks of oxygen before leaving.

Evelyn returns to the rail yard and discovers that the creature has made its way into the basement. She fires a single shot to draw the creature out. Once the creature joins her on the surface, Evelyn shoots at one of the tanks, setting the creature on fire, though it doesn’t kill it. The fire from the explosion causes the sprinklers to go off, which in turn allows Evelyn to walk past the creature without detection. Evelyn makes it into the basement, where she finds Marcus unconscious in the bunker, though he awakens not long after. She then shuts the bunker door without locking them inside until the creature leaves.

Evelyn, Marcus, and the baby share the single oxygen tank while they’re forced to remain hidden inside the bunker. Evelyn exits the bunker but quickly discovers that the creature is still near and runs back inside. However, she is unable to get the door closed, and the creature reaches inside in an attempt to grab them, but it only manages to claw at Evelyn’s leg. As the creature claws at Evelyn, a high-pitched frequency comes from the radio. Marcus forces it to cower at the sound of the high-pitched feedback from the radio until he can reach the gun sitting on the table and fire a single headshot to kill the creature. 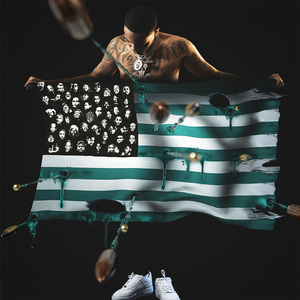 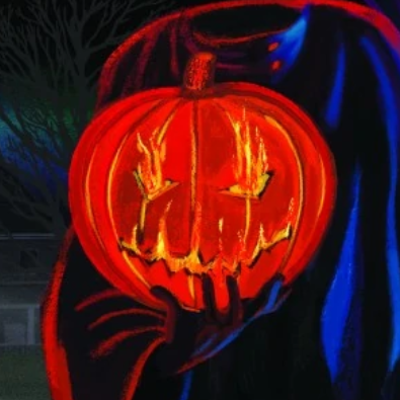